Global capitalism has allowed giant businesses to control the economy of the world. It has made it possible for companies to expand their businesses to multiple parts of the world through globalization. Globalization has allowed American businesses to move overseas to manufacture their products at lower costs. It has made it cheaper for businesses to manufacture, produce and sell products at a price that allows them to maximize their profit. Have you ever bought something for a very low price and realized it was from a foreign country all the way across the world? How is it so cheap if it has traveled all the way from China? Global capitalism and externalized costs have made it possible for companies to sell their products at cheap prices while still maximizing profit. A major example of this can be seen in McDonald’s signature Big Mac. How exactly does a huge company like McDonalds get their products to the lowest retail price possible? The answer: externalized costs.

Marion Nestle is an author for Food Politics, where she published her article, Food is Cheaper Because Costs are “Externalized”. Nestle’s article explains the externalized costs that go into bringing the crops from the field to the dinner plate. Nestle breaks down externalized costs into four categories: human costs, environmental costs, safety costs, and health care costs. The article explains how costs are externalized in each category and how it negatively impacts certain aspects of life. Below is an image representing the external costs of a McDonald’s Big Mac as explained in the article, Each Time McDonalds Sells a Big Mac. 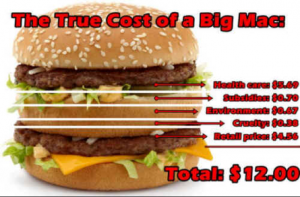 Pollution is another huge example of an externalized cost. Pollution is an externalized cost because instead of dealing with waste in ways that are environmentally friendly and sustainable, companies are getting rid of their waste in the cheapest ways possible in order to maximize profit. Examples of this could be a company dumping their waste into a nearby river instead of spending money to have it disposed of properly. The article, Talk About Externalized Costs, talks about this issue. As pointed out by the article, “[Businesses] are shoving a whole range of costs – from pollution to climate change to water depletion – onto communities around the world”. It is estimated that the world’s top corporations, “contribute $2.2 trillion in environmental damage”. Other forms of pollution, such as waste from shipping packaging, use of gasoline, plane emissions, etc. are also forms of externalized costs and are extremely detrimental to the environment.

Another example of an externalized cost is taking advantage of people and poor working conditions in other countries. Businesses move their factories overseas in order to take advantage of the minimum wages in other countries. A prime example of this comes from the article, I Lost My Hands Making Flatscreens I Cant Afford. In the article, Rosa Moreno explains how both of her hands had to be amputated due to a work related incident. She was working with dangerous machinery six days a week, for $400 a month. The work she was doing involved extremely dangerous machinery, but she had no choice, she needed to support her family. Could you imagine working 6 days a week and only making $400 a month? I couldn’t. It’s not livable, which is why the government of the United States implements things such as minimum wages. However, other countries don’t have these laws implemented, so workers in these countries work for a few dollars a day. Being that there isn’t a minimum wage implemented, American businesses move overseas to take advantage of workers in foreign countries. Why would American businesses run their factories in the United States where in some states, minimum wage is as high as $11 an hour, when they could go overseas and pay their workers less than a dollar an hour. Below is a cartoon that brings to light the horrible working conditions of sweatshops in other countries of the world. 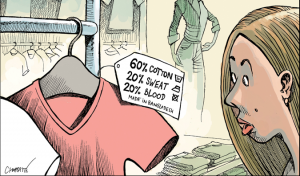 The tag of the t-shirt points out the cruelties of sweat shops, making it known that some of the externalized costs include “sweat and blood”. The bottom of the tag notes that the t-shirt was made in Pakistan, which only adds to the point of the article that the t-shirt was produced in a sweat shop. Another article that talks about these sweatshop conditions is, American Businesses Taking Advantage of Sweatshop Labor, on The Channels. The article goes into depth about the harsh and cruel working conditions in factories in other countries and talks about how much American businesses are profiting from sweatshop labor.

To be sure, some people disagree that externalized costs are a bad thing. Some arguments for externalized costs are that it keeps the economy flowing. It is argued that without externalized costs making prices cheaper, that people wouldn’t be able to afford all of the goods they need, and thus, will stop spending money. However, if businesses became less globalized, and began producing products solely in their country of origin, theoretically, minimum wage would increase, so that the consumers can afford the products.