Globalization is the spread of business on an international scale. There are different arguments as to when globalization can be dated back to, some say globalization can be traced on a smaller scale all the way back to the B.C.E time period, while others say that certain turning points in the world’s economy such as the industrial revolution or colonization was the true beginning of globalization. Globalization can be seen as a “double edged sword”, meaning, it has both positive and negative consequences. Perspective is a huge component on someone’s outlook on globalization. Looking at globalization through multiple perspectives allows us to better understand the effects it has on us and the world around us. All in all, globalization is both good and bad for society. It works in ways that bring us together while always pulling us apart.

Globalization works to bring the world together because it spreads certain entities such as cultures and technological advances. The world forms bonds through these advances. For example, globalization has led to the mass spread of technology. People in developed nations now view things like cellphones and computers as necessities. Could we go without them? Sure. Do we want to? No. The spread of cellphones and other technologies has led to a rise in social media use and the connection to the world via the internet. The internet is now the main form of communication for most people. The news is available at the tap of a button and other forms of informative technology, such as social media, connects people to other people across the world in a matter of seconds. Another way the world becomes closer through globalization is through the spread of culture. The spread of culture allows people to take part in another nations culture, through things like food, clothing, and traditions. This spread of culture would not be possible without globalization.

While globalization can be viewed positively, it can also be viewed negatively. At the same time that globalization can be seen bringing the world together, it can also be seen dividing us. One of the strongest dividing forces of globalization is the impact it has on wage gaps and worldwide income inequality. Globalization has been proven to make the wealthy wealthier while not benefiting the middle class. This uneven benefit from globalization has led the wage gap to increase worldwide. An article, written by the U.S. News, cites reports from the Pew Research Center. The Pew Research Center states in their report that, “Our finding that recent globalization trends have increased U.S. inequality by disproportionately raising top incomes represents an important step forward,” (US News). The income of the top 1% has been seen to continuously rise while the income of the lower 99% continues to stay at a near constant rate. Below is a graph that shows the distribution of the household income in the past few decades. As you can see, although globalization has been on the rise for the past few decades, the lower 99% of household incomes have not seen much benefit, if any from the spread of globalization. 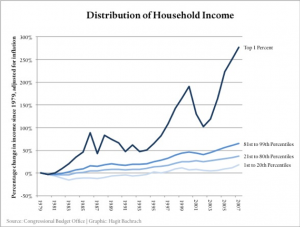 The inequality seen in wages is similar to the inequality seen in developing countries and underdeveloped countries. As the developing countries continue to benefit from free trade and globalization, the underdeveloped countries continue to struggle. Neil Godbout, a writer for the Times Colonist, writes that, “The majority of the world’s masses have not benefited from open markets and free trade, unless the definition of benefit is creating a small ultra-rich global class holding an increasing amount of the world’s wealth and forcing billions of people in developing countries to abandon their fields and rural lives for mega-city shantytowns.” (Times Colonist). Below are a compilation of graphs that show the global income of 1800, 1975, 2015. These graphs show how globalization has led to the rise of some continents’ increase in daily consumption per capita, which is a direct result of globalization. 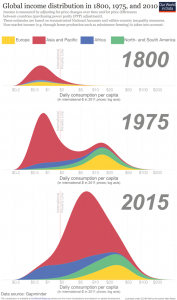 As you can see from the shifts in the graphs, major developed countries such as North America and European nations, can be seen dominated the right side of the graphs in 1975 and 2015. Also pictured in the graph are nations in Africa and Asia/Pacifica that have been left behind, for the most part, towards the lower half of the graph during in 1975 and 2015. This skew in the graphs shows the inequality of developing countries and shows how globalization, which has largely increased in recent decades, has hugely impacted developmental inequality in nations around the world.

In class we watched a documentary that discussed Walmart’s globalization and the positive and negative impacts it had on the world, and more specifically, the impacts it had on the working-class citizens of the United States. The metaphor of the double-edged sword was a huge proponent of this documentary because the dateline documentary did a great job of getting multiple perspectives and opinions. The documentary showed how the globalization of Walmart positively and negatively affected the people of the United States. The positive effect was seen in reduced retail prices for the consumers, while the negative effect was low wages and loss of jobs.

A person’s perspective on Globalization depends on their position in society. Are they a CEO of a major retail chain or are they your average middle class store worker? If you are an average middle class citizen, you may like globalization because it lowers the retail prices of the products you buy. However, if you work in the retail business you might hate globalization because the cheaper the product, the easier it is for the company you work for to lower your wage because you can “afford to live” on cheaper wages because products are cheaper. So, globalization, is it good or bad? My answer: it’s all about perspective.