“Trump Withdrawals the US from the Paris Climate Agreement”. You may have seen this news headline a lot over the past year. But what exactly is the Paris Climate Agreement? And why did the United States withdraw from it? It’s been a little over a year since Trump withdrew from the Climate Agreement, and his decision is still met with a lot of criticism and skeptics. But did he make the right choice? I believe in climate change and feel that the United States should take part in the Agreement. Scientists and critics would agree with me, but let’s review the facts that will allow you to come to your own conclusion. 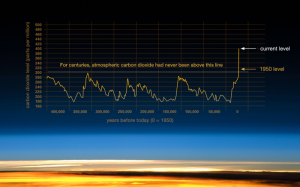 The Paris Climate Agreement is an agreement adapted by the United Nations Framework Convention on Climate Change or UNFCCC. This agreement, “unites all the world’s nations in a single agreement on tacking climate change for the first time in history” (BBC). The main key element of the Agreement is that it aims to control global temperatures and keep them from continuing to rise. The graph shown below is an estimate of the effects of greenhouse gas emissions on temperature. The graph also serves as a prediction of what could happen if the Agreement is not implemented. The red portion of the graph shows the current direction the global temperature is headed in if the world doesn’t change its ways. The part of the graph marked “New pledges” is what the UNFCCC predicts will be the outcome of the Paris Agreement if completed. 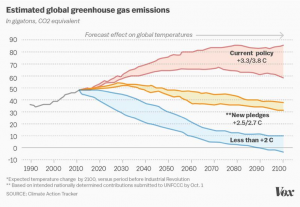 Still not sure if climate change is really worth worrying about? Statistics have been released that show that the effects of climate change are already being experienced globally. Have you noticed that the summers are getting warmer, and the winters are getting colder? Have you heard about or experienced any record setting hurricanes or other natural disasters? All of these things are direct effects of climate change. The National Climate Assessment Reports predict that future effects of climate change will continue for hundreds of years, and include continued rise in temperatures, frost-free seasons will lengthen, precipitation patterns will change, and we will experience more droughts and heat waves (NASA). These changes increase risk for extreme storms, droughts, floods and wildfires, which will ultimately put millions of lives at risk every year.

In class we talked about what has changed since Trump withdrew from the Paris climate deal a year ago. While the article states that, “despite the uproar over the Paris withdrawal, it’s notable that U.S. greenhouse gas emissions are hardly set to explode and the country is still slowly moving toward lower greenhouse gas emissions” (Washington Post). However, the article also states that it’s still early and certain new policies that are in progress of being passed including “Trump rollbacks and weakened fuel efficiency standards for cars, if those come to pass, could certainly lead to increased carbon dioxide emissions. One analysis by the Rhodium Group suggests they could add over 100 million tons annually by the year 2035 because of an auto standards rollback alone” (Washington Post).

In conclusion, climate change is definitely real and man-made, and the effects of it are already being felt. The entire world was shocked when President Trump withdrew for the Paris Agreement back in 2017. Although the true effects of the United States’ withdrawal from the climate agreement are yet to be seen, one thing is for sure: very little is going to change unless the “second largest global emitter of greenhouse gas” is willing to lead the charge. While the scientific effects of the United States’ withdrawal from the agreement are yet to be seen, the worldwide confusion of where the United States stands on climate change is evident. I believe that the United States needs to commit to the Climate Agreement. It is scientifically proven that the world will not be inhabitable if humans continue with the recklessness that is being seen right now. The planet is suffering from our reckless behavior, and the United States needs to join the Paris Climate Agreement in order to unite with other nations in an effort to save our planet.