Maps are a very important supplement to a news article. Maps allow the reader to attach a name of a country to a place in the world. Most average civilians don’t know where every country in the world is, so having a map in a news article is an easy way to enhance an article. A large majority of people are geographically illiterate; meaning, they have no idea where anything is located on the globe. As reported by US News, “nearly three-quarters of eight-graders tested below proficient in geography on the 2014 National Assessment of Educational Progress”. These statistics can be seen in the image below. 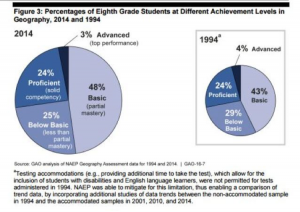 Many article writers forget this when they are writing a story about various different countries. It is important to use maps as supplemental tools to an article because it is one thing to understand the news story, but a whole different task to understand where the news story is taking place. Although maps are important supplemental tools for an article, they are only useful if they properly represent the information in an article. Using a combination of both large scale and small-scale maps in an article is the best way to properly inform a reader while supplementing the information in an article.

Fighting rages on in Sar-e Pul, killing dozens. But where exactly is Sar-e Pul? Could you find it on a map? What about Afghanistan? The British Broadcasting Corporation or BBC recently wrote an article about the violence in Afghanistan. The writers first talk about the problem in Afghanistan, explaining that militants are attacking Sar-e Pul province in Afghanistan, which has already led to at least 17 deaths in the last 24 hours.  The militants are members of the Taliban regime who are currently at war with the Afghan government. The writers then go on to explain the reason for the fighting and the implications it has had on Afghanistan as a nation. Later on in the article, the writers include a map of Afghanistan, which points out the capital of Kabul and the province of Sar-e Pul that is being talked about in the article. On the lower right-hand side of the map is a tiny, smaller scale map that is zoomed out to show Afghanistan’s location in relation to other countries in the eastern hemisphere. 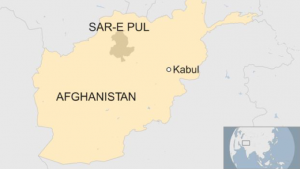 The map of Afghanistan is essential to this article. Without the map, it would be impossible for even a well-informed person to know where the province of Sar-e Pul is within Afghanistan. However, the map is not useful for people that are not well-informed geographically. The writer used a tiny map to show the small-scale view of the world in order to show where Afghanistan is in relation to other countries. However, the tininess of the map, and the fact that it has no labels renders it almost useless. It would be very hard for even a person that is well versed in maps to be able to see where Afghanistan was in relation to other countries using the tiny map given. Also, the fact that the tiny piece of the world map that is used isn’t labeled makes it practically useless in itself. What good is it to know where the country is geographically if you don’t know where it is in relation to other countries?

A classic argument as to why a map is not necessary in a news article is that the reader should already be knowledgeable about the topic/topic location, or that the reader can simply look up a map on their own time. While these are two fairly valid points, I disagree. It is not reasonable to assume that all readers will be knowledgeable about the geographic location of the place they are reading about. Geography is not a very popular topic in school systems. Although most people who graduate from school will have basic geographical knowledge, formal in-depth geography classes are not likely.  Most adults would probably not be able to correctly label the 50 states in the United States, let alone label a map of the Middle East. The second argument that a reader can just simply look up a map of the news topic is also unreasonable. Most readers won’t stop to realize they have no clue where something’s geographical location is unless you present them with a map that they’ve never seen before. The goal of a news article is to inform readers of things they aren’t aware of. So, in doing this, why not inform them of background information of the event, such as where the country is located. Also, the internet is not always a good place to look for geographical answers. There are a lot of manmade errors but also computer errors as well that mistakenly misrepresent the world through maps. Good examples of these mistakes can be seen by CNN in the article, CNN Map Errors, by the Washington Post. Other errors in online map sources can be seen in this article by wired.com, Nicaragua Accidentally Invades Costa Rica, which explains how a google maps error caused the accidental invasion of Costa Rica by Nicaraguan forces.

As you can see, the internet is full of errors. In order to save the reader from being misinformed, and to enhance the article, writers should always include small-scale and large-scale maps to their writing. It is equally important to be informed of what is going on in the world, as well as where it is going on.

2 Replies to “Where Exactly is Afghanistan? Help, I’m Lost!”