Globalization: the word itself just sounds confusing. But hopefully, this blog will clear a few things up about globalization and its effect on society. It may sound confusing, but there can be simplified ways of analyzing and looking at globalization. Globalization comprises a set of social processes shifting in human relationship toward globality. This is facilitated through advancements in communication and transportation technologies that could potentially speed up transportation and increase productivity. This means that human relationships are changing from personal/local relationships to global human relationships. There are some major tensions within and surrounding globalization like uneven development and homogenizing vs differentiating forces, and there are many questions surrounding both issues. This post will be focusing on the question: is globalization pulling society closer together or pushing us further apart? The answer is both! When answering and analyzing these questions it is important to specify the society one is evaluating and in relation to which topic. My argument is that globalization is pulling the world society closer together culturally and politically, while pushing us farther apart economically.

To understand the current condition of globalization, it is important to understand it’s history.  Globalization has been going on, arguably, since the prehistoric period (10000 BCE- 3500 BCE), as covered in chapter two of “Globalization: a short introduction”, when hunters and gatherers would explore continents and settle on that land (p. 20). The author wrote “Advanced forms of technology capable of overcoming existing geographical and social obstacles were largely absent; thus, enduring long-distance interactions never materialized”. This caused the level of globalization in this period to be very limited in comparison to the next periods in history. Some of these forms of technology included the invention of language and the wheel in the premodern era (3500 BCE- 1500 CE). The picture below illustrates the spread of humans around the globe during some of these periods. Toward the end of this period, elaborate trade networks were established which influenced the spread of ideas, cultures, religions, and, unfortunately, diseases that wreaked havoc on societies that were not used to the new illnesses. During the early modern period (1500-1750), the basic groundwork was laid for the capitalist economic system we have today. With the modern period (1750-1980) came increase in world trade, innovations in transportation and communication, a word population explosion, and an increase in rapidity of industrialization. Now, we are in the contemporary period and are witnessing large amounts of expansion and interdependencies on a global scale. All of these factors and their products were key players toward expansion of globalization. 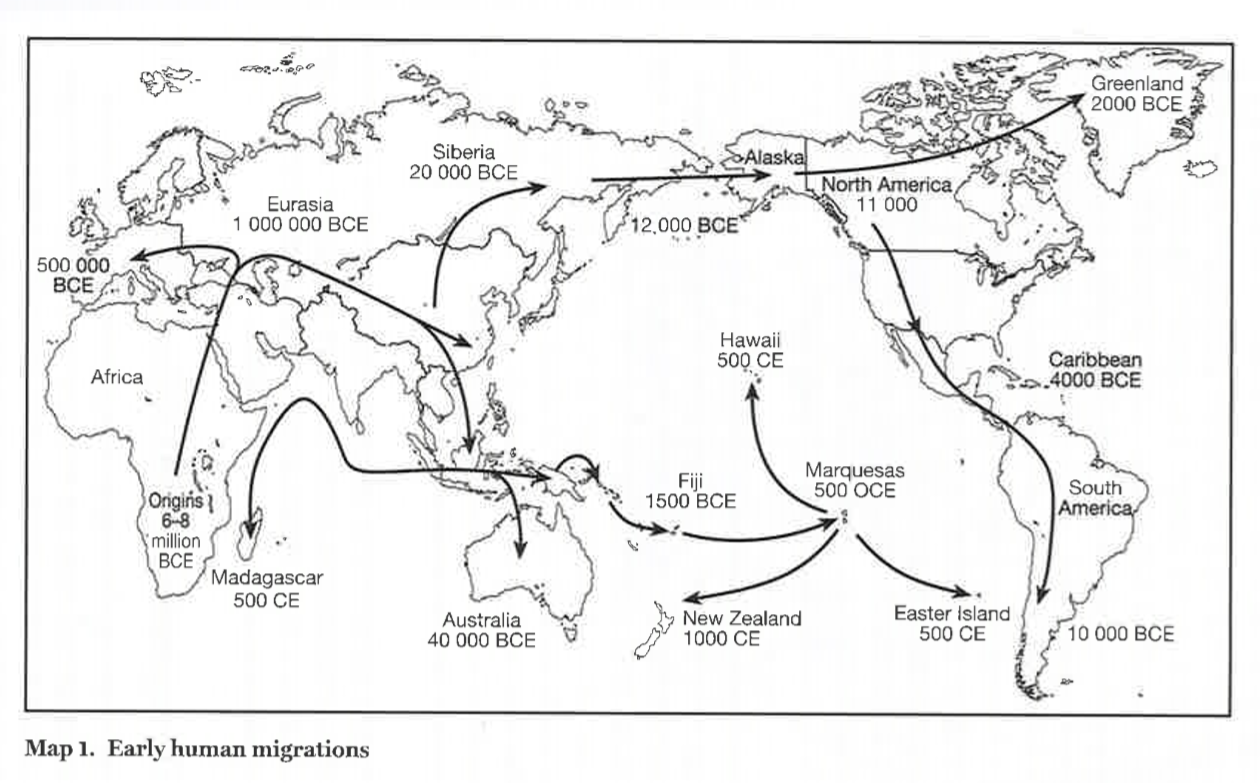 Culturally, the world is more intertwined with each other than ever before. This began with the setting up of trade routes in the early premodern era where people and merchants would travel these routes and exchange goods. This exchange of goods often came with an exchange of language and cultural ideals, and expansion of one’s knowledge of people different from themselves. None of these would be possible, however, without the evolution od technology of travel. The invention of the wheel leading to animal drawn wagons or carriages, the onset of sea travel, the making of cars and airplanes, and the creation of standardized navigation systems all contributed to the intermingling and mixing of cultures. Also the popularization of mass media created awareness of other cultures and societies as shown in Globalization: a short introduction on page 33, “the 20th-century arrival of mass circulation newspapers and magazines, film, and television further enhanced a growing consciousness of a rapidly shrinking world”.  As Shanza Khan and Adil Najam in their essay on globalization, “The process of globalization suggests two simultaneous images of culture. The first image entails the extension outwards of a particular culture to its limit, the globe. Heterogeneous cultures become incorporated and integrated into a dominant culture which eventually covers the whole world”. America, for example, is often referred to as a melting-pot of cultures which is a result of the technological advancements of globalization.

Politically, world societies have been more interconnected than ever. With the innovations of technology that advanced communication and non-face-to-face interaction, one country has more influence on another country than even a few years ago. Before navigation technology such as maps and compasses, one country’s leaders neither had any influence on not any concern with the others. For example, the US played a key role in upholding the reign of some foreign leaders, whether it was good for that country or not, because that leader had a favorable relationship with the US. Another example is the accusations of Russia’s interference in the US’ 2016 election. If the allegations turn out to be true, this would be a perfect example of how technology has brought different countries so close that they can affect the results of an election for leader of that country. While this sense of globalization might seem freeing or natural to some, for others, it leads to an ultimate cut-off of their freedom. Charles O. Lerche wrote in his journal for the International Journal of Peace Studies, “…nation-states themselves experience steadily decreasing freedom of action and ever closer ties to each other”. As each country becomes more and more intertwined with each other, this limits the freedom of weaker (or periphery) countries from the more powerful (core) countries.

Globalization contributes to the widening of wealth gaps between countries through capitalism, which is a fundamental player in ongoing globalization. A key factor in capitalism in the division of labor, both on a local scale and on a world scale. This division is when countries have a more efficient and profitable means of producing a few products and specialize in those products. This creates importation of basically everything else needed in their society a necessity. It then becomes necessary for periphery countries (as described above) to enter into disadvantageous trade relationships with core countries that exploit the periphery country’s labor, goods, and resources. All of this furthers the wealth disparity between countries and forces countries further apart in that sense.  These economic inequalities create other imbalances in the educational and health fields as discussed in this article from the NY Times, which creates more interdependence between countries.