By looking at the map below one would never be able to guess that California is currently experiencing one of the worst fire seasons in the United States’ history. The map to the left only shows the fires as small icons, hence preventing the map from depicting the true severity of the 18 wildfires burning around California. 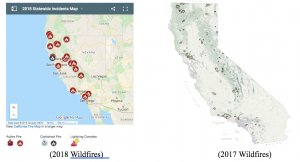 Since the beginning of 2018, California has been devastated by 18 major wildfires. According to a CNN article by Madison Park, 3 of the top 30 largest wildfires California has ever experienced are currently burning at this moment. Furthermore, the state is experiencing some of the hottest temperatures on record and this year’s rainfall is expected to be 50-70 percent below the average. In total, the flames have burned 500,000 acres of land and the fire season still has months left. This indicates that the wildfires will only get worse, causing experts to think that 2018 will beat 2017 for the worst fire season in California’s history. If you look at the map to the right, it shows the California wildfires of 2017, when compared to the map of 2018, it is clear that the 2018 California wildfires are already much worse than those of 2017.

Denis Wood, a cartographer and professor wrote a book called Rethinking the Power of Maps. In the first chapter; Maps Blossom in the Springtime of the State Woods says that “maps give us, reality, a reality that exceeds our reach, our vision, the span of our days, a reality we achieve in no other way”.  This passage means that as humans we use maps to understand what we cannot physically see. Map makers must make accurate maps to provide the audience with a reliable depiction of what is happening in other places around the world. However, the map above does not provide an accurate depiction of what is currently happening in California. The map was created for people living in California and the rest of the United States to view and use; however, if someone were to look at the map they would only see 18 icons. Because each of the icons are the same size, the severity of the fires is not accurately represented. Furthermore, it makes the fires seem small and confined to those circles which again is not the true condition of California. The wildfires in California have engulfed more than half a million acres of land, while each fire is a different size and are at different levels of severity. This map shows them all as the same. The map also displays 17 uncontained fires and only one contained fire based on the different color icons. This provides the viewer with inaccurate information about the status of the fires. According to an article on the northern California wildfires each of the fires are contained in some degree. For example, the Mendocino Complex fire which started at the end of July is now only 5% contained while the Carr fire is completely contained. The map again generalizes all of the fires and labels them as contained and burning while most of the fires are somewhere in between.

Overall the map of the California wildfires provides an inaccurate representation of what is happening in California. But would viewers ever question the accuracy of the map? In an article by The Washington Post it was stated that people do not question the accuracy of Google maps, despite the fact that there are many errors on Google maps. Similarly, with the map of California no one is going to question whether the information is correct. The article continues to say that our species trust in Google is completely unsafe and unjustifiable. As humans we tend to trust the information we are given; however, when it comes to our safety we should be relying on accurate information. For those living in California the map above does not provide accurate information about the dangerous wildfires which could put thousands of people in danger. Since the beginning of the 2018 fire season tens of thousands of California citizens have been evacuated. If a California resident were to google a map of the wildfires, and saw the one above, they would not know how close the fires are to them or the seriousness of the fires. On a different note, if an organization wanted to send help to California and saw the map above, they would not be able to tell which areas needed help the most.

Overall the map above does not accurately provide information about the wildfires in California. This is because the map is drawn in a way that displays each of the fires as an icon of the same size, rather than using size to show the differences between fires. The only difference in the fires is that some are labeled as contained. In reality each of the fires are burning at a different size and each are a different level of contained. This brings up another point made by Denis Wood, the power of a map. According to Wood, people underestimate the power of a map, and that the power of the map is still waiting to be unleashed. He even goes as far to say that “many of the maps they’re making are extraordinary and powerful”. This is true, the maps we make hold more power than we may realize. The map of California for example holds the power to show viewers how dangerous and just how server the wildfires really are. Wood believes that it is the mapmakers have a responsibility to provide accurate information because of the power maps hold. As a society we do not question that what we see on maps could be inaccurate, as a result Woods is right, maps do hold a power that we have yet to recognize.