Maps are used all over the world and, while they can be helpful to many people, one rarely stops to consider how different maps might affect one’s understanding of the world around them. No one really asks, “who was this map made for?” or “how might this map change if it were made in a different region of the world?”. While maps can be extremely helpful and useful, they make assumption about viewers’ basic knowledge which could hinder their perspective on the world and their understanding of the issue being portrayed. For example, weather maps assume that their audiences have a basic understanding of how to read maps, their details, and the information they intend to present.

A discussion of maps and their usefulness or relevance is inherently a discussion of power. We see it in global hierarchies and government: the people with power dictate what gets portrayed, when it gets portrayed, and to what extent. When one thinks of who has the power when making a map, they usually think the cartographer would, and to a certain extent that is correct. But, who has the power over the cartographer? Their boss(es), the government, people with more economic and social power. This involves the idea of dominating power, where it presents the interests of those in a specific class, race, sexual orientation, gender, ability level, socio-economic status and so on. This is the same issue with weather maps. The creator of the map has a certain agenda and a certain set of information they need to get across, which may not be the most beneficial for some viewers due to differences in power dynamics. This simulator shows the extent to which power affects our understanding of countries (specifically the size of countries) around the world. The map in figure one, from this Washington Post news article, shows a perspective of the US, Canada, and other countries’ possible trade routes through the arctic ocean that was previously not considered. It shows that a map’s center can drastically alter how it is read and the audience it was made for. 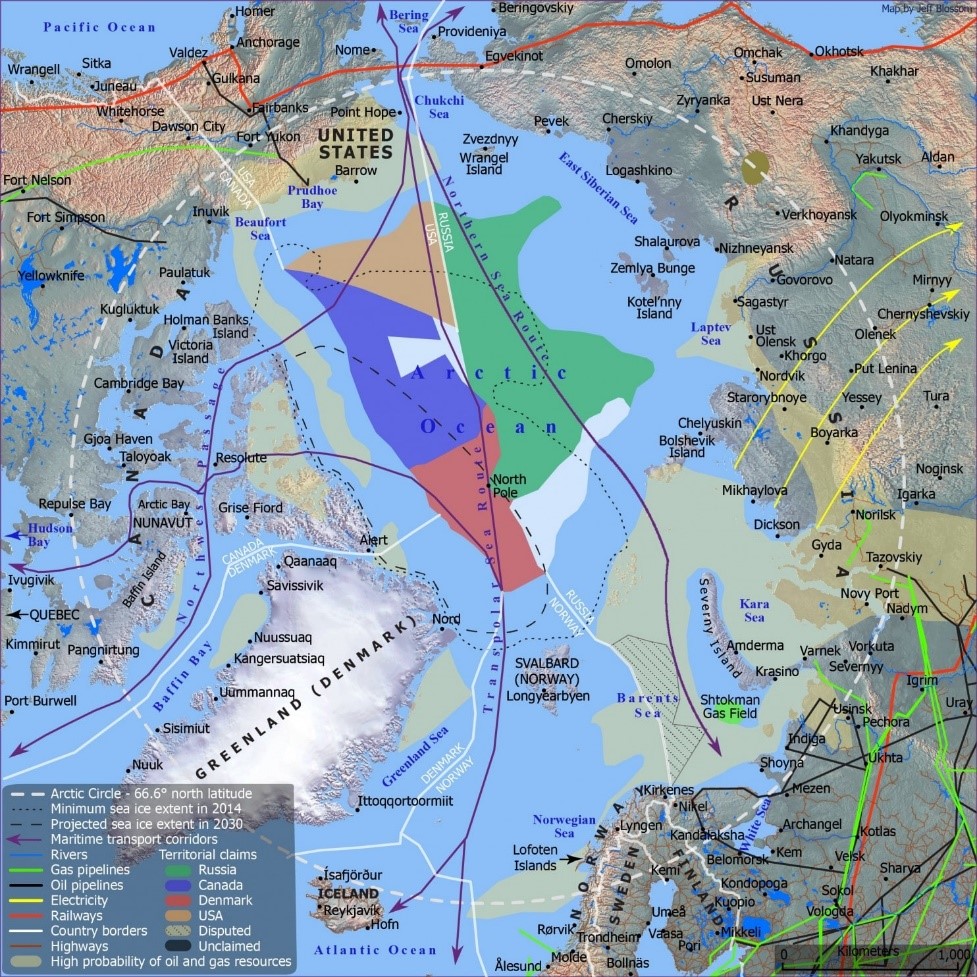 Maps of natural disasters often play into the idea of global hierarchies and the power dynamic that goes with them. There have been many crises (whether natural disasters or other) that would not get reported in the US news. Is it because those events and people aren’t important? Kind of, yes. If these catastrophes have no influence or impact in powerful countries no one in those countries would hear about them. The only reason people in China or Russia, for example, would hear about what is happening in the US is because the US has an impact on their economies and societies, and vice versa.

Hurricanes are serious and sometimes even fatal natural disasters, but can the map of a hurricane’s path affect how viewers respond to the severity of the storm? Hurricane Florence is set to travel up the east coast this week, but some of the maps showing the path of the storm are misleading, and confusing. For example, the map in figure two from the Boston Globe shows probabilities of wind speeds for the storm. At first glance, someone in Pennsylvania or West Virginia would assume that the storm would not hit their area. However, the map in figure three, from the same Boston Globe article, shows the storm Covering most of Pennsylvania, all of West Virginia and parts of states even further out than those. 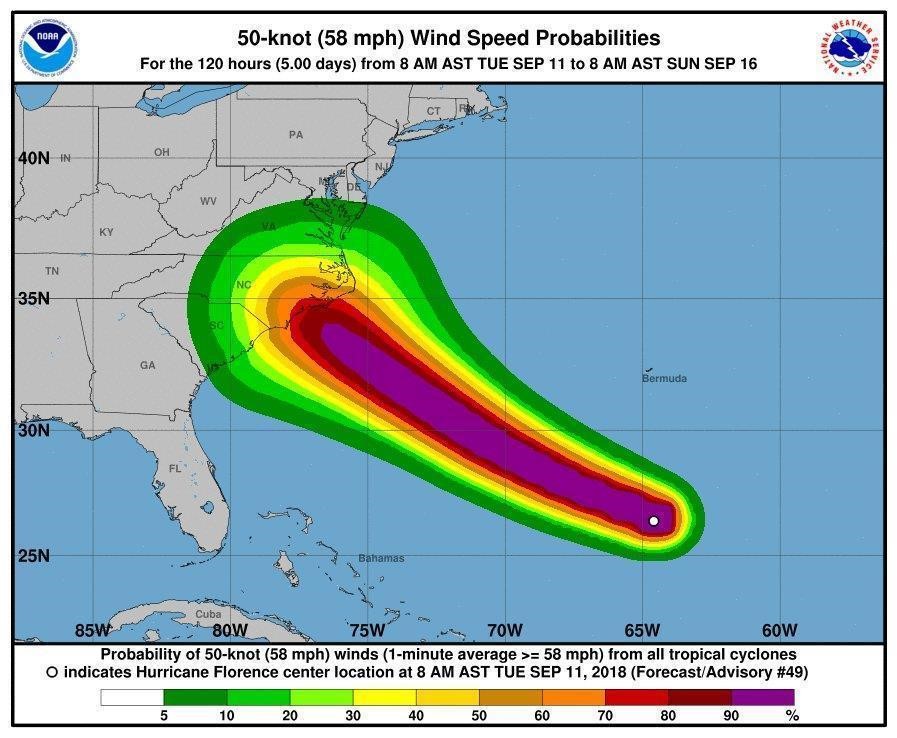 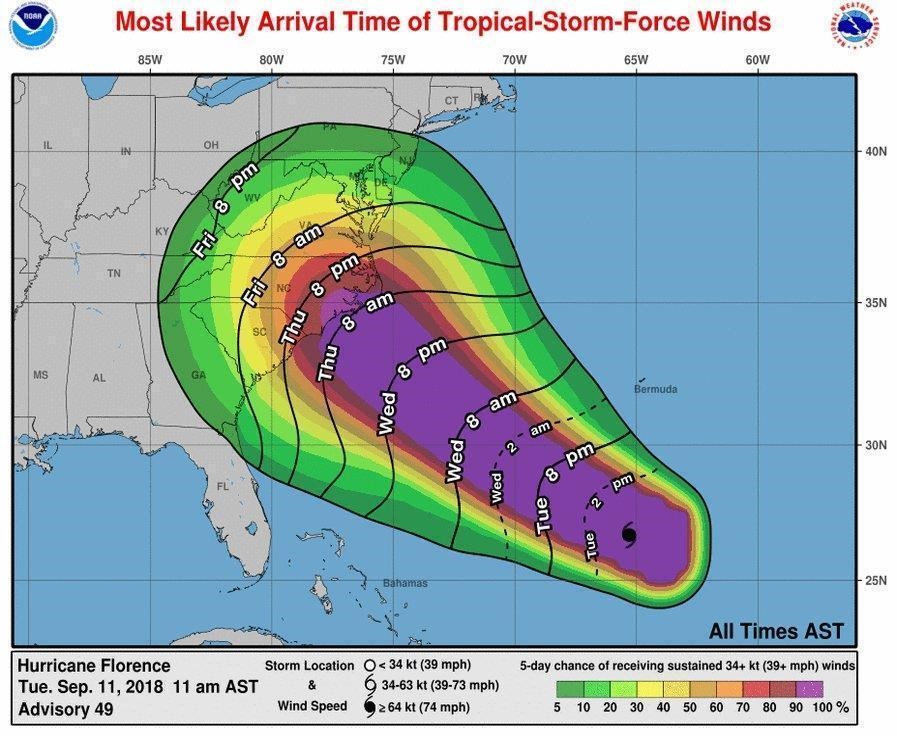 While it makes sense for these maps and maps of other weather events to be from the perspective of those it is affecting, sometimes the perspective the map was made for (or the map’s center) can influence its accuracy. For example, the map below in figure four is a map of the same storm as shown above. This map from a BBC news article makes many assumptions about who the viewer is and their knowledge of certain places. If someone from the US was looking at this map, they would only be able to see that it would hit the middle of the east coast. It also assumes that every person knows how to read military time, which is not always the case. The information in this map is not communicated clearly and would not be very helpful to someone concerned about the storm. Additionally, it would impede someone’s understanding of the storm because, with the lack of information, the scale, size, and strength of the storm cannot be determined. It fails to address the other side effects of the storm that the islands experienced, like wind speeds and harmful waves. 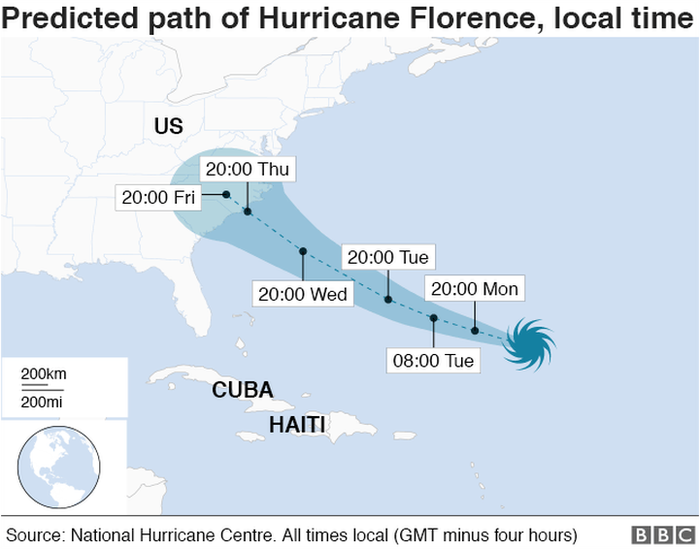 Some might argue that these maps are perfectly accurate for what they are made for. The first map does show probable wind speeds for certain areas from Tuesday 9/11 to Sunday 9/16. However, the conditional information that is needed to understand the map is not clearly presented and would easily be looked over by someone who did not know how to read it. The second map, one could say, is perfectly accurate as well, and that the relevant information is clearly displayed in the image. At first glance though, one would look at the map and assume the differing colors are a representation of wind speed or rain fall predicted for that area, but, the colors show an area’s probability to experience prolonged winds of thirty-nine miles-per-hour winds or greater. Along with those confusing elements, both maps are lacking a distance scale. Instead, they use latitude and longitude markings, which would be helpful to those who know how to read that. This relates back to map-makers making assumptions about who is going to be reading the map and what they know. Someone could also argue that the last map shown is an accurate representation of the position of the hurricane depending on time. However, the distance scale they used requires a sort of measuring tool for someone to know the distance the storm is from the coast at a certain time. Through the exploration of these maps, I’ve found that many cartographers assume their audience already knows how to read maps perfectly, but in the situation of natural disasters, these assumptions and biases can be confusing and even dangerous.