In today’s day and age, most people get their news online and use digital maps rather than the old-fashioned globes that now only seem to appear in school classrooms, if even at all. While this might be more convenient and useful in the technology driven world, it causes problems that most people don’t even think about. The distortion of size, shape, or area of countries (or entire continents in the case of Africa) can really change the way people think about certain places and how much they care about events going on in these places.

For example, in the article from class where the Ebola outbreak was discussed, people in western countries who see the news more than others didn’t care as much as they should’ve. The news outlet labeled Nigeria wrong and made it look like it was a landlocked country. However, it actually has one of the most popular airports in all of Africa in Lagos and it’s also on the coast where there are multiple trade patterns that go in and out of ports on the coast of Nigeria every day. Once the people that were previously uneducated about the location of Nigeria found out where it really was, they cared more about the Ebola outbreak knowing now that the odds of it leaving the country were higher. 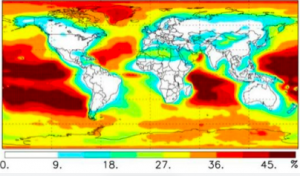 More recently, new sources of formic acid have been discovered in the Pacific and Indian Oceans. The map from the image  above shows the concentrations of the acid, where it’s distributed and distance from the coast. Although I’m not sure where the large concentrations are coming from, I do know that this acid is corrosive to the skin and it’s something people should care about when they decide to plan tropical vacations surrounded by high concentrated areas. Although the information on this map is clear and it seems to demonstrate the issue, there are some major problems with it. It hinders the understanding of the issue because of the center they chose and the size of Africa. The center should’ve been the Pacific Ocean because that’s where the highest concentration is. With the larger section of red together in the center, it’s more likely that it’ll attract the attention of readers and hopefully expose the issue at hand. Also, Africa looks smaller than it’s, as it does on many maps, but this time it affects the understanding of the issue because the red section is along the coast and the coast is a lot longer than it looks on the map. In cases like this, with something dangerous to people, it’s important that maps are accurate and represent the issue at hand.

Furthermore, social media in relation to the maps online plays a very large role in how people view issues around the world. Related to the article about the formic acid in the oceans, there is another article about the formic acid in the troposphere layer of the atmosphere. This article talks about how often this topic of the effects of the troposphere or the formic acid is talked about in social media, how it’s “trending”. There are only four news outlets that are talking about this issue and it was only blogged about and tweeted about by one. This could be a result of the maps made by the makers that do not show the true level of concern that this issue deserves.

Moreover, similar to the activity from class, this article discusses the importance of the size of countries and how they are distorted by the maps. Due to the fact that people do not use globes anymore, as mentioned before, it’s imperative that the maps online are accurate and give a realistic ratio of size relative to one another so problems are not blown out of proportion, or on the other hand, they are taken seriously when they should be. In addition to the continent of Africa that always seems to be made too small on maps, the two countries that are affected the most are Greenland and Antarctica at the poles. While they are not that big, they seem to be much larger on digital maps because the poles are stretched out along the edges of the map. This matters because since the beginning of learning about countries, geography and empires being formed thousands of years ago, size has always been an indicator of power in the world. The bigger the empire was, the more power they had. Of course, it’s not the only factor and today more indicators matter, like how strong the economy is and the medicine and technology they have; however, size is still relevant. Arguably the most powerful countries right now are China and the United States and they are definitely not small countries. Map makers need to keep that in mind when distorting the size of the countries, it affects their view to other people, especially kids learning this for the first time in school.

Contrasting from the last article, another article that was talked about in class was the map that was so accurate that it fit into a globe when it was folded up. This shows the other side of the issue previously talked about and demonstrates how helpful it is to have an accurate map to teach students and to use in general to understand the relationships between countries, trade and different economies. Something interesting about this map is that it doesn’t have the same center that maps usually have. Maybe that’s the key to an accurate map because the Earth is round so why do people keep making the same flat map with distorted sizes? It doesn’t need to be a rectangle like they have been.