Globalization is bad for the global economy because of how it creates uneven development. The concept of globalization debatably started with the European colonization of Latin America, Africa, and India. In the 15th century when colonization began. Major world powers such as England and Spain took advantage of the abundance of recourses found in these new territories. In 1948 when England became the biggest power in India; violence, starvation, and corruption overtook the country. As a result, England continued to tax India heavily and export its recourses.

The East India Company smothered the Indian economy and stopped it from developing. By 1840, the English parliament decided to convert India from a manufacturing country into a country that specialized in exporting. As a result, India would have to export their recourses to England in the form of raw materials only to buy them back at a higher price, after they had been manufactured into goods. Which created an economic gap between England and India. While England excelled economically, India was plagued with high taxes and an even larger trade deficit. Despite the fact that England colonized India almost a hundred years ago, the effects of uneven development can still be seen today. Because of English colonization, India was unable to advance economically, which creates setbacks in today’s economy. However, today India seems to be pushing toward a shift to a manufacturing economy  in an attempt to close the negative economic gap created through globalization. While this is considered a positive, that India is finally beginning to grow economically, in reality the country would already be fully developed if it wasn’t for globalization.

Globalization also results in the exploitation of underdeveloped countries to benefit core countries which results in a poor path dependency. Andre Gunder Frank wrote in  The Development of the Underdeveloped that current underdeveloped state of Latin America is a direct result of capitalist development. As capitalism spread in Latin Americas, it only benefited the core countries. Meaning that during colonization countries like Brazil benefited from having a trade relationship with its colonizers. Core countries rely on underdeveloped countries for cheap labor and raw materials.  For example, the coffee trade was a major factor in boosting Brazil’s economy during colonization. However, shortly after its small economic success Brazil faced a server economic decline. This is because during colonization Brazil had a stable trade with European countries; however, when Brazil was on its own it could not sustain the small economy it had built. As a result of this, Brazil’s path dependency has prevented the economy from growing. Brazil was exploited to benefit European countries, and when the core countries brought their trade elsewhere, it had a negative and long-lasting impact on Brazil’s economy. Globalization is bad for the global economy because it puts developing countries on a poor economic path from which they cannot easily change; leaving the underdeveloped countries unable to develop. 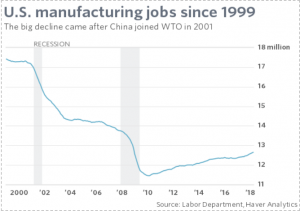 Another aspect of modern globalization that negatively impacts the economy is how overseas manufacturing is effecting domestic jobs in America. Due to cheap labor and materials overseas, it is cheaper for products to be manufactured in countries like China than exported to the United States. Because of this shift in manufacturing millions of American jobs have been lost. The graph  shows the extent of job loss in America; over 6 million jobs lost due to manufacturing moving to China. In an attempt to combat this shift in the economy President Trump’s administration is looking to put protective tariffs on goods being imported into the United States from China. Resulting in a trade war between the United States and China. Globalization and capitalism directly resulted in suppliers in the United States looking overseas for cheaper manufacturing. This caused the loss of millions of jobs in America and a trade war with China. Globalization is bad for the global economy because it pins countries against each other in an effort to preserve their economy.