Since the dawn of capitalism, the earth has been suffering. Pollution and climate change are an omnipresent challenge that the world is facing right now. As a community we need to start consuming less and smarter. Capitalists have convinced consumers that there is only one way to shop, that only benefits them. While capitalists have a monopoly over consumer consumption, there are still some other types of markets that are not major contributors to climate change; the D system, and local farmers markets. System D is an economic system that is considered “off the books”, it isn’t illegal but is considered to be an illicit economy. System D economies can be found all over the world, mainly in underdeveloped or developing countries. While it is difficult to find a system D economy in the United States there are other ways to consume products that are not produced by capitalism- farmers markets. Local farms contribute less than 1% to pollution each year. Furthermore shopping at a local farmers market will help turn the linear commodity chain into more of a closed loop commodity chain. In order to cut down on consumption we need to start shopping locally. 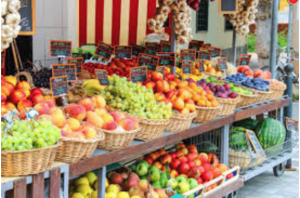 It is no secret that climate change is a very large issue that our world is facing right now. With the omnipresent fear of global temperatures rising above two degrees Celsius, we must do something in order to create change. At the local scale, the change does not need to be something drastic, instead it can be small simple changes. These changes could be as simple as starting to buy your groceries at your local farmers market.

There are endless benefits to shopping at a local farmers market, you will save money, eat healthier foods, generate less waste, and ultimately consume less. When you shop at a local farmers market, you are surrounded by organic and non-GMO foods. Most small farmers pride themselves on the fact that their produce is pesticide free. Because these farmers don’t use chemicals on their crops, no chemicals are accidentally polluted into the earth. On top of the fact that the food at the farmers market is healthier, shopping at the local farmers market is also much better for the environment in general. On average “fresh produce” consumed in the United States, first travels over 1,500 miles. If more people began to get their food from local farms, it would ultimately save hundreds of thousands of gallons of oil. Shopping locally also helps consumers cut down on plastic use. Most farmers markets use paper bags or encourage shoppers to bring their own bags. This results in the use of plastic decreasing significantly, causing a positive impact on our environment.

Capitalism does not want small local farmers markets to succeed, because this would mean that the small business farmers are surviving without the government imposed subsides  large corporate farmers benefit from. But when consumers spend their money at a local farmers market they are truly paying for the quality of the food. Large corporate farms are all subjects in a linear commodity chain, the food is grown, then shipped to where it is packaged, then shipped to ware houses where it is stored until it is finally shipped and distributed to different store all over the world. After the food is consumed, the packaging is then thrown out and the waste travels to a landfill. By shopping locally consumers support a closed loop commodity chain which creates little to no waste. Local farmers grow the fresh produce, travel a very short distance to the farmers market where their product is sold in very little to no packaging. After the consumer consumes the product there is virtually no waste. By shopping at your local farmers market, you will by fault start to consume less due to the fact that there is significantly less waste than at a corporate grocery store.

Experts have predicted that if we continue to consume as we do today, with the same levels of CO2 emissions, by the end of the century global temperatures will rise above 7 degrees Celsius since the industrial revolution. This would be catastrophic for the earth. Something needs to be done. Capitalism and industrialized countries are considered the undisputed largest contributors to climate change. International governments seem to acknowledge the fact that there is a very large environmental issue at hand; however, the largest contributors to the problem do not seem to be doing anything at all to stop it. This puts a heavy burden on individuals to combat climate change. By cutting down on consumption it will ultimately result in the reduction of pollution by capitalism and the industrialized countries that promote the unhealthy habits created by capitalists.

Shopping at local farmers markets have a ton of pros and very little cons. You will save money, help the environment, you would be supporting local farmers, and you would not be supporting capitalism. The only real downside is that your food might not look as pretty as it would in a grocery store. This is because local farmers markets do not use chemicals to make their food appear to be fresh. So while you food doesn’t look as good, it is much healthier for you and free of any chemicals.

By shopping at local farmers markets, consumers are producing less waste, promoting a closed loop commodity chain, and supporting local farmers rather than large corporate companies. At the same time consumers are reaping the benefits of a better quality of food and saving money. With global temperatures still rising and no plan in place to keep temperatures down, it does not look like the UN is going to meet their goal of keeping global temperatures from rising above two degrees Celsius. The environment needs help, and before it is too late consumers need to do their part in saving the environment. In the end, the easiest way to help the environment is to cut down on consumption, and the easiest way to cut consumption is to shop locally.